NOTE: This is for a PWG (Pnuematic Waste Gate) 2013 and earlier N55 with a 3.5″ downpipe, if you have a later model F30 N55, the downpipe is a 4″ and some parts may be different, also other DP’s reuse the mounting bracket, luckily the CTS Turbo PWG DP does not so one less step for us PWG folks. The EWG folks should be able to use this guide as well, just double check your part numbers.

Here is my experience changing out my downpipe. The install pretty intuitive and the steps don’t need to be followed in the same order I did it in but this should give you a good idea of what a fairly inexperienced car guy might go through changing out their downpipe.

It probably took me about 2 hours total work time. 3.5 hours with the kids/wife/life delays factored in

Make sure you have the tools required for the job:

Optional tools (made it easier for me)

Tools I wish I had for the install: 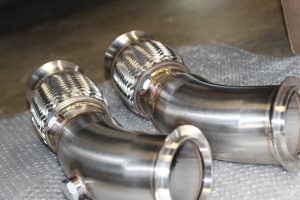 Not much to say here, inexpensive, seems to be constructed well, nice welds, flange is flawless, flex section looks fine. Smooth inside with no manufacturing remnants left behind. It lined up perfectly with no issues what so ever.